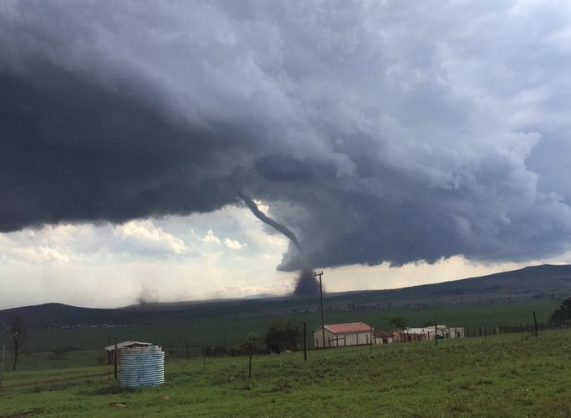 Cooperative Governance and Traditional Affairs (Cogta) MEC Sipho Hlomuka has deployed disaster management teams to Ulundi following severe thunderstorms and the spotting of a tornado in the area of KwaCeza and Edlebe.

The department has contacted the South African Weather Service who have confirmed that a violent storm ripped through parts of Ulundi and what was spotted has according to their radar system the traits of a tornado.

“We have taken the decision to deploy our teams to the area although no damages or injuries were reported in this incident.

“Our teams are stretched thin on the ground as we continue to respond to incidents that have afflicted parts of the province since the 25 of October 2019.

“Last night a tornado hit the area of Watervaal in Utrecht, in the eMadlangeni local municipality.

“During this difficult time our teams are determined to respond efficiently and effectively following these incidents” said Hlomuka.”

The South African Weather Service (SAWS) said on Saturday that it had received reports of another tornado in KwaZulu-Natal, near Ulundi.

This after a tornado tore through Utrecht, KwaZulu-Natal which led to disaster management teams being deployed to the area.

The SAWS had earlier issued a warning of severe thunderstorms observed over Ulundi and Mthonjaneni “with possible damaging winds, hail, excessive lightning and heavy downpours moving towards Ntambanana and Hlabisa.”

Since October, 23 lives have been lost in the province due to weather-related incidents.

Last week, a tornado struck New Hanover in the Midlands.

Inclement weather conditions are expected to continue across the province, with the South African Weather Service issuing a warning for severe thunderstorms for large parts of the province for Saturday. These are expected to bring the possibility of strong winds, hail and heavy downpours in parts of uThukela, uMzinyathi, uMgungundlovu, Amajuba, iLembe, King Cetshwayo Zululand and uMkhanyakude Districts.

Compiled by Makhosandile Zulu / The Citizen