Democratic Alliance in the Free State is currently waiting outside OR Tambo House, Bloemfontein, to hand over a memorandum to Premier Sisi Ntombela today. The opposition party began marching from Hoffman Square to St Andrews Street just outside the Premier’s Office. Premier Candidate, Patricia Kopane, joined residents with buckets on their heads to protest against water shortages in parts of the province. 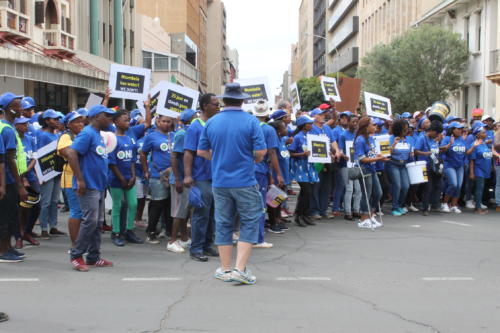 “Today the DA marched with Bloemfontein residents to bring attention to the plight of those who cannot access water. We are tired of the Premier’s lukewarm response,” explained the Premier Candidate. Kopane emphasised municipal debt in relation to utilities. “When the municipality fails to pay the water board people on the ground are the ones who suffer,” she added. Kopane was joined by MP Nomsa Marchesi, and member of legislature, Roy Jankielsohn. Premier Ntombela did not meet the crowd, however, Thuso Ramaema of the the Premier’s Office did sign the memorandum.