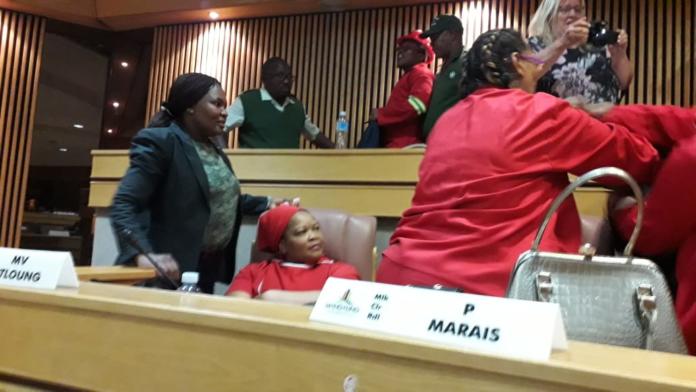 Dulandi Leech of the Democratic Alliance stated that she and fellow party members chose to exit the meeting shortly after a scuffle involving members of the Economic Freedom Fighters (EFF) started last week.
“There were also no translation services available yesterday so we as the DA decided to walk out as we could not properly partake in the meeting,” said Leech.
According to Leech this followed a cancelled meeting last week that wasted taxpayers’ money. “This cannot be decided by just one person or seconded by another. The whole council must decide on that. We put a lot of emphasis on that because costs are incurred when meetings are held,” she added.
Councillors of the DA left the meeting following a violent eruption when members of the EFF were escorted out by security personnel. Bloemfontein Courant reported that councillors were manhandled during the meeting in an attempt to remove them from the area. EFF’s Paballo Poone-Rankholo said that the speaker, Mxolisi Siyonzana, had failed to honour the motion. “The speaker was supposed to provide reasons as to why the motion was not to be decided over secret ballot. However, the motion of no confidence was not on the agenda today,” she said.
The disagreement took place after what the party viewed to be his failure to provide council with reasons as to why he decided not to allow the motion of no-confidence vote. The motion was to be done by secret ballot. “We walked out after the EFF was removed by security. The interpretation with regards to the rules and orders was the cause of the dispute,” said Leech on the row.
Leech stated that the way that the meeting was run is an example of the bad state of affairs within the Mangaung Metro Municipality as a whole. “This is a clear example of the mismanagement of our metro currently and one can only look outside Bram Fischer building or drive into Bloemfontein and see how our suburbs and roads look,” she explained. – Nomaqhawe Mtebele