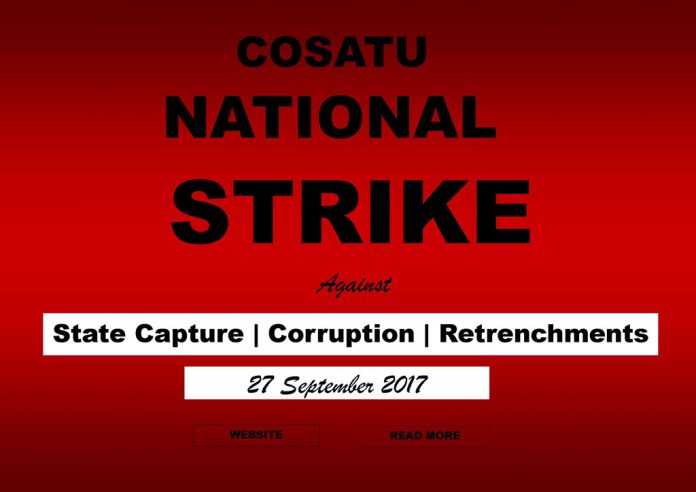 The Congress of South African Trade Unions (Cosatu) will be striking against corruption and state capture in Bloemfontein today. The nationwide strike includes marches in Mafikeng and Kimberley, along with other major cities. The union will march to the Premier’s Office where they will hand over a memorandum to Ace Magashule. The march will begin at Batho Community Hall. According to Northern Cape Cosatu’s Anele Gxoyiya, there will be a march to the Premier’s Office in the early morning.

“The content of the memorandum relates to our opposition to corruption. We are saying that they must intensify the fight against corruption and make sure that government officials are not captured by private business. So that is basically the reason why we are marching,” explained Gxoyiya.

According to a statement by Cosatu the strike targets both the private and public sectors in terms of corruption. “This strike is about sending a message to both government and the private sector that as workers and citizens, we are tired of corruption. We are standing up tomorrow against the cancer of corruption that is eroding our gains and also undermining our democracy,” it stated.