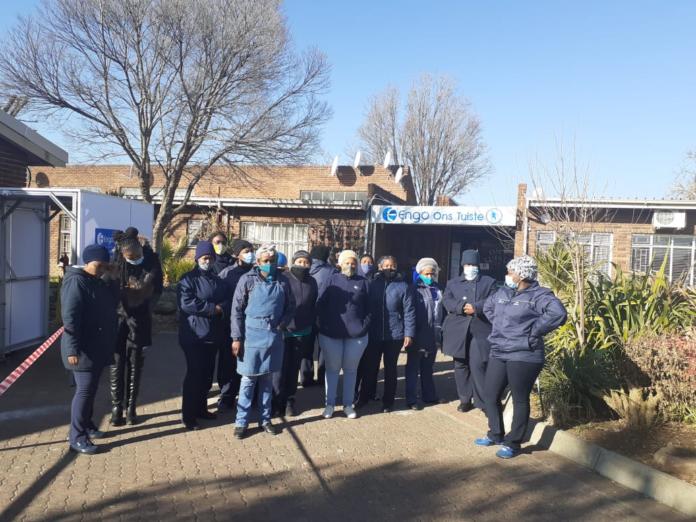 The management of Engo confirms one of its elderly residents at ‘Ons Tuiste Sentrum vir Bejaardes’ in Bloemfontein has indeed tested positive for COVID-19 following a hip replacement surgery in May.

OFM News reported that the Engo Chief Director, De Wet Claassens, reveals the patient had been a resident at the old age home since April 2020, contrary to allegations made by healthcare workers indicating otherwise. He says she was admitted to a local private hospital for the procedure on 27 May and was discharged from this private hospital 15 days later.

The elderly woman was thereafter taken into a rehabilitation centre locally and only released back to Ons Tuiste last week Friday, as was corroborated by the disgruntled healthcare workers at the facility.

Engo management stresses the patient was placed in isolation upon being discharged and was set to remain there for a 14-day period. However, on Monday, the elderly patient fell and she was transported to a different local private hospital where she was found to have contracted the coronavirus. The elderly patient remains at that hospital for treatment. Contrary to reports by the healthcare workers, Claassens says the case was reported to the department of health and social development respectively on Tuesday.

On Wednesday, a small group of disgruntled healthcare workers at the old age home refused to work. They demanded that employees – permanent and contract workers – be tested and placed in quarantine until their results are released.

While the employer, on the other end, says only the carers that looked after the patient in question needed to be tested and were tested.

The Mangaung Health Tracer Team followed up on this matter on Wednesday after they received numerous calls from panicked employees at Ons Tuiste, much like OFM.