According to legend, coffee was first discovered by Kaldi, an Ethiopian goat herd who noticed that his goats were livelier after eating a certain type of beans. The rest, as the saying goes, is history and today, coffee is one of the most widely accessible drinks in the world. Over the years it has developed in various forms, with some countries producing their own signature blends, thus making it a commodity in modern society as millions of people worldwide swear that their mornings are not complete without a good, warm cup. While South Africa is trailing behind the rest of the world when it comes to worldwide coffee consumption and Bloemfontein’s Coffee Culture is behind those of the bigger cities, there is an effort from various individuals who are determined to contribute to the growth of the Coffee Culture.

Founding partner of the Bloemfontein Coffee Expo, Nkgadima Leope, through an event that was started two years ago in collaboration with the local specialty coffee shops, is doing just that. “It is a passion project that was inspired by the collective love of coffee that I and my co-founders share for specialty coffee. As we thought about the idea more and more, we realised that it would also help to develop entrepreneurs in the city and province who operate in this industry,” Leope said. 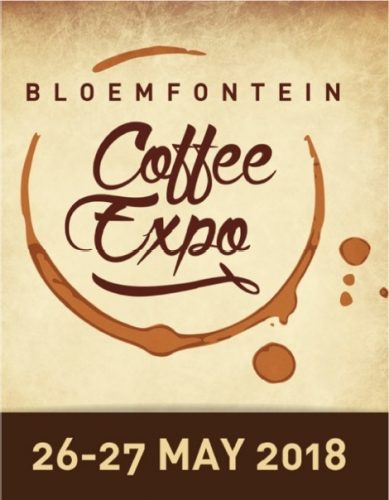 The first event was in April 2016 and it was a hit with coffee lovers in the City of Roses. The partners then resolved to make it a bi-annual event as they needed to gather research on coffee producers, baristas and roasters in the province and city so that they may be part of the events going forward.

One of the popular coffee hang-out spots, Stereo Café, which is the first roastery in Bloemfontein, will make its debut at the expo. The café is owned by former OFM presenter, James Kilbourn, who is passionate about coffee and the related industries. Apart from Stereo Café, coffee lovers can expect to see Jaru Coffee, Royal Roastery Coffee House, Urban Brew Coffee and the Bloemfontein Coffee Roasting Company as participants at this event which aims to engage the community of coffee lovers, to educate coffee lovers and to bring coffee lovers together.

This event will be held at the Urth Garden Centre on Saturday 26 to Sunday 27 May 2018 and only 350 people can attend each day, so tickets are limited. Tickets cost R55 (R45 for entrance and R10 to be exchanged for a free Americano coffee) and will be available for purchase at various coffee outlets. For inquiries, call Petros at 065-992-9212. Alternatively, like the ‘Bloemfontein Coffee Expo’ page on Facebook for all the latest news and updates regarding this event. – Pulane Choane
pulane@centralmediagroup.co.za