In an attempt to rid the city of unsafe buildings and business practices, the Mangaung Metro Municipality clamped down on privately-owned and government buildings in Bloemfontein yesterday.

The day long operation was aimed at businesses which do not comply with the city’s Building Control Policy. The inspection led to a privately owned building in the CBD which belongs to notorious businessman Savvas Kyriacou. Officials from Law, Environmental Health, the Emergency Services, Building and Zoning Control, the Department of Agriculture, Forestry and Fisheries, Centlec, Law Enforcement and the inspectorate were part of the inspection to determine if the building complies with health and safety regulations. Bloemfontein Courant previously reported on the building after it had caught fire back in 2016, causing more than a million rand’s worth of damage.

“In terms of our audit as the municipality, we have since realised that there are a number of people and buildings that are not compliant either from the engineering point of view, which is the structural integrity, or from the space of environmental health where people are actually selling food that is not necessarily hygienic,” said Mangaung Metro’s spokesperson, Qondile Khedama. “We have to enforce the bylaws of the city. If we don’t do this, we will be putting the lives of our citizens at risk,” he added. 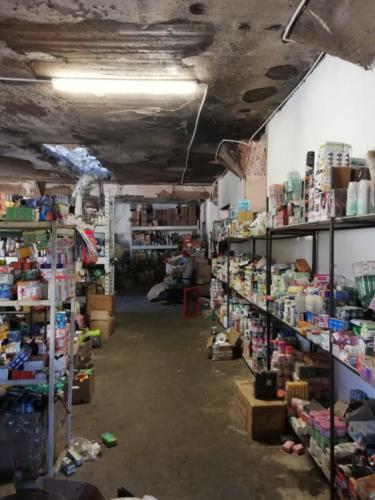 A tour of the building revealed large quantities of expired goods ranging from medication, food items, consumables, toiletries, cleaning products, building materials, baby products, car parts and various other products which are stored in close proximity to each other.

According to Kyriacou, the building is merely used as a storage facility and the goods stored inside are not sold to the public, however, concerns were raised after he mentioned how some of the foreign nationals that own shops allegedly steal some of the goods to sell at their stores. Kyriacous also mentioned that the building has security, but the revelation raised the question of the effectiveness of the security measures put in place. According to a statement from the Mangaung Metro Municipality, the rates and taxes account of the building is in arrears by R231 354.52. The building was closed off by the Park Road Police to prevent any further operations.

The Marlo Glas building opposite the street (owned by Savvas Kyriacou as well) is also used as a warehouse. According to Kyriacou, the stock in that building is still in good condition. Upon close inspection, officials found that some of those products were also past their sell-by date.

“We contacted certain suppliers saying that we want them to take back this stock. We don’t sell it. We don’t expose it to the public,” Kyriacou said. – Molebogeng Malebo
molebogeng@centralmediagroup.co.za