Residents of Bloemfontein watched on with the rest of the world as the Springboks became the 2019 World Rugby Champions on Saturday. Courant asked a few locals how they felt about the massive achievement which is a third win by the South African Rugby Team since 1995. The messages expressed love and pride but most of all people expressed a feeling of unity as they celebrated.

“I really like what Siya said at the end which was that we can do a lot together. Watching the game was amazing and we bonded a lot. It has a way of bringing everybody closer. We’ve been high-fiving everybody with a bok t-shirt on today,” said Tate Brummer.

“I haven’t really watched rugby before this so I had to educate myself a lot. Sport has a way of pulling people together even though I didn’t understand it, I know now, how the scoring works and it was enjoyable. Siya, young man you have made us proud,” said Tsiamo Tlatsana.

“What a time to be a South African! We are so proud of the Bokke for representing us well and we are all the way behind them. We are so proud of Siya as the captain. Habashwe!” said Megan Beckmann, who enjoyed the match with her family. 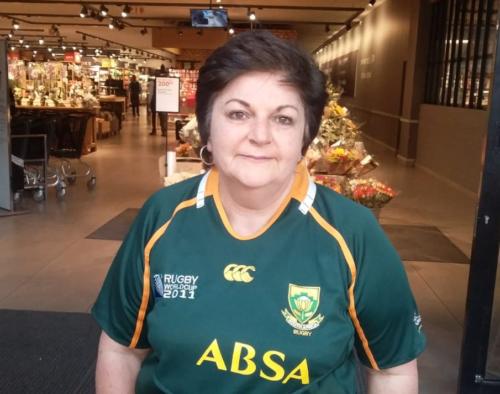 “The game was awesome and it unified everyone who was here watching today. The win was amazing because we played such a good game and I am very happy,” said Lilly Terwin who watched the final match at a local shopping centre with many other residents.

“I’m very happy we played well and it united the country which is always good. I watched the game with my friend and his family and the feeling we all got when they won was amazing. We are very proud of the Springboks,” said Hanru Buhrmann.