The Presidency and the Department of Sport, Arts and Culture, in partnership with Oliewenhuis Art Museum, have recruited young people involved in the creative arts sector to participate in the Public Arts programme for a period of two months.

The programme consists of creating art murals at selected community sites around the Free State to raise awareness on social ills such as Genderbased Violence (GBV) and precautions for the Covid-19 pandemic while also focusing on national symbols.

The entire project was led by the project leader, Marius Jansen van Vuuren. Here are some of the murals painted in Bloemfontein.

This mural has been painted next to the entrance of a block of flats named Kula Court, located on 2 Short Street, Bloemfontein Central Business District (CBD). The mural can be viewed when passing the building. The concept and mural design were created by Lehlohonolo Lepheana, showing how silence is often used as a tool by abusers to isolate their victims. The mural was painted by Julian Mentz (also known as Junior Mentz), Lehlohonolo Lepheana, Valentino Molebatsi, Letsego Shago and Lawrence Mangalo. 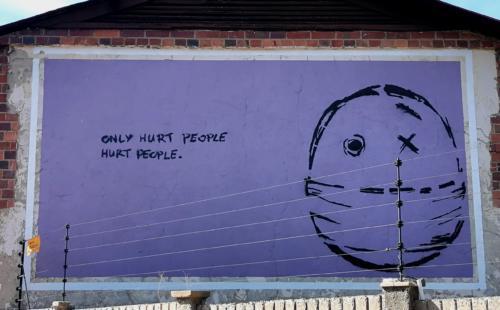 Another mural is painted on the side of a utility building on the premises of Bloemfontein landmark: Ramblers Club. The work speaks to the theme of GBV, but also attempts to incorporate elements on the prevention of the Covid-19 pandemic. The mural was designed to be deliberately ambiguous to highlight how domestic abuse was aggravated by the lockdown. The concept was created by Dex Mafonyane and the mural design was done by Junior Mentz. The mural was painted by Julian Mentz, Dex Mafonyane, Rethabile Nyatsoba, Letsego Shago, Lawrence Mangalo, Meghan Johns, Karabo Leeuw, Waverlry Makatsila and Mojalefa Mabine. 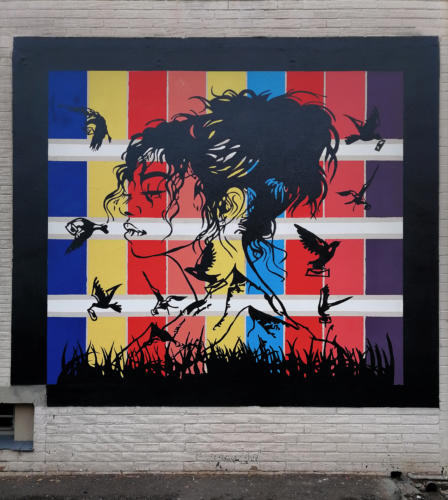 A mural painted on the side wall of the Qualitas Career Academy, located in Short Street, in the CBD of Bloemfontein also speaks to the theme of GBV with a particular focus on illustrating a woman in an empowered position. Tino Molebatsi created the concept and the design for the mural. The mural was painted by Junior Mentz, Hloni Lepheana, Rethabile Nyatsoba, Letshego Shago, Lawrence Mongalo, Waverley Makatsila, Bob Kolatsoeu, Snowy Royland, Siphu Ngqoshela, Tino Molebatsi, Lisa Dondolo, Rebecca Huang, Dex Mafonyane, Michael Ntaje and Thato Pula. 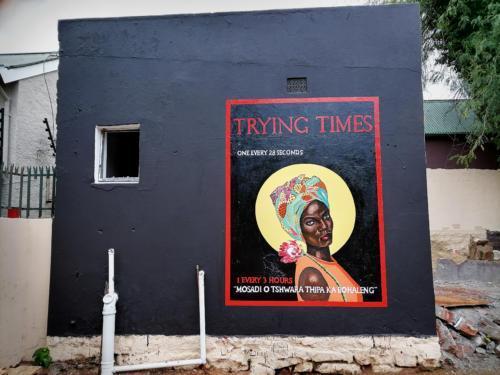 This mural is painted on a utility building on an open lot on the Corner of Kellner Street and 1st Avenue in Westdene, Bloemfontein and also speaks to the theme of GBV. The concept and mural design was created by Litemba Mpambani. The mural was painted by Junior Mentz, Moeketsi Lebese, Kgopotso Lesane, Kekeletso Mochumi, Kgahliso Kau and Litemba Mpambani. 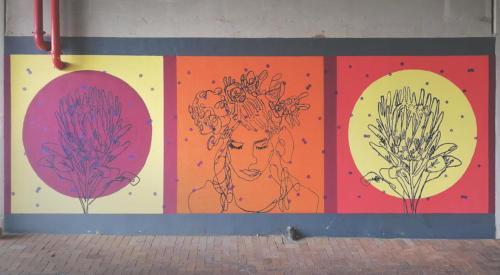 A mural is also painted on a wall under the bridge of a parking structure at Preller Square. It speaks to the theme of national symbols by referencing two proteas on each side of the figure of a woman. The mural was designed by Liz Vorster, a B.A Fine Arts student at the University of the Free State. Junior Mentz, Meghan Johns, Dia Mafonyane, Micheal Ntaje, Karabo Leeuw, Thato Pula, Rebecca Huang, Lisa Dondolo, Lehlohonolo Lepheana, Bob Kolatseou, Rethabile Nyatsoba, Tino Molebatsi, Lawrence Mongalo, Letshego Shago and Mojalefa Mabine painted the mural. 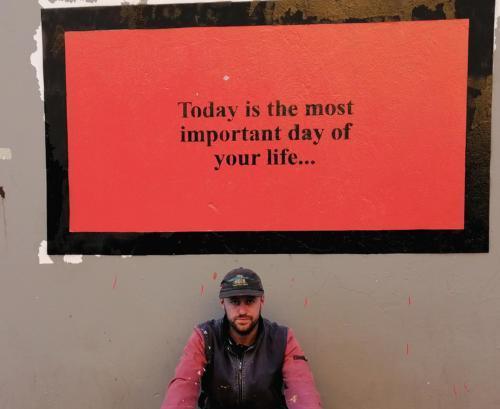 The ‘most important mural’ was a concept designed by Dia Mafonyane.  It is located in the CBD, in what is described as Bloemfontein’s worst looking street. Yoxall Street is an infamous location where trash is dumped. The mural tries to raise awareness to the kind of choices we make and aims to prompt people to make better quality decisions. The mural was painted by Junior Mentz, Dia Mafonyane and Lawrence Mongalo.