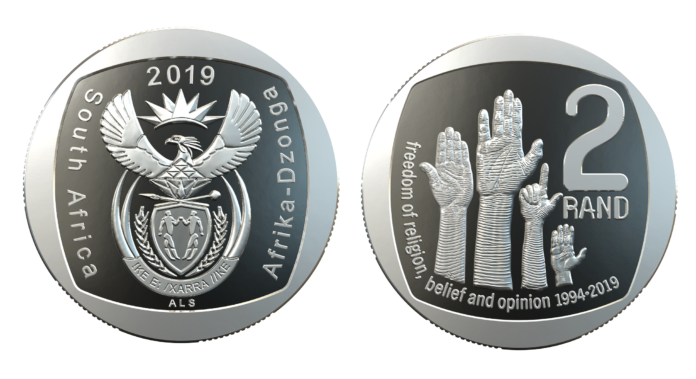 While race-based discrimination was the most obvious during apartheid, religion was a further invidious form of discrimination. Christianity was the dominant religion and was often used by the government to justify its oppressive laws.

Artist, Peter Mammes who designed the coin, says he wanted to depict people, ethnicity and religion without being specific. “The idea of using hands came to me while looking at images of religious ceremonies. The hands on their own do not convey gender, colour, age or any information that might exclude any group among the population of South Africa, while at the same time conveying a sense of unity, freedom and virtue-like swearing an oath in court or praying. Hands speak universally to everyone across every creed and religion, even those without religion can relate,” Mammes added.

The reverse (tails) features raised hands representing the individual person, also a sign many make to express an opinion and wish to be heard. The obverse (heads) features the national coat of arms together with the date of issue, ‘2019’, and the words ‘South Africa’ written in English and ‘Afrika-Dzonga’ in Xitsonga.

The commemorative coins are introduced in a phased manner and ‘Freedom of Religion, Beliefs and Opinion’ coin is the final of the R2 coins to be issued. The remaining coin to be issued still within this month is the R5 coin which represents the right to vote.

A special collector’s folder has been created for coin enthusiasts and can be collected, at no cost, from the South African Mint’s retail store in Centurion, as well as the various other outlets mentioned on the SA25 website.