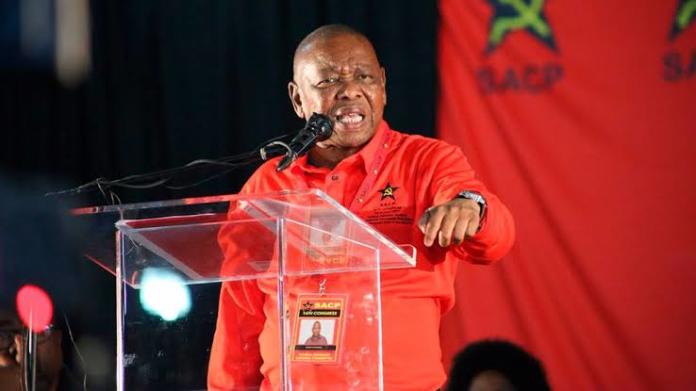 The South African Communist Party on Saturday reaffirmed its alliance with the African National Congress and called for workers’ pension funds to be used to finance the country’s ailing manufacturing sector to boost job creation.

Speaking at the ANC’s 108th annual January 8 anniversary celebrations in Kimberley in the Northern Cape, SACP general secretary Blade Nzimande said the SACP would continue to support the ANC, provided it continued to embrace “communist values”.

ANC chairman Gwede Mantashe, who introduced Nzimande on the stage, took a jibe and quipped, “We hope he [Nzimande] doesn’t have too much blood in his alcohol”.

This was in reference to an incident in April 2019 when Nzimande, then minister of transport, mistakenly told the SABC that a new breathalyser test could detect “blood in your alcohol”, instead of “alcohol in your blood”.

“We will continue to be an ally of the ANC for as long as the ANC’s primary objective is that of transforming and improving the socio-economic conditions of the working class and the poor in our country,” Nzimande said.

“We need a radical change to our economy so it can serve our economy. Like Cosatu [Congress of South African Trade Unions] is saying, we want expropriation of land without compensation. We want workers’ pensions and provident funds to be used to build the manufacturing base of our country so as to create jobs and not to fund vanity projects that serve the private interests of a few. We want prescribed assets,” Nzimande said.

The SACP was opposed to the idea that people could “use illness and disease as a basis for profit making” and called for the rolling-out of the proposed NHI and the “defeat [of] all those forces opposed to the NHI”.

“The SACP reaffirms our commitment to our strategic alliance, we pledge to continue to working together in pursuit of our shared strategic objective of the struggle, the national democratic revolution, and it is our view that to pursue this struggle we need maximum unity in our alliance.

“We must defend and deepen the gains we have made since 1994, led by the ANC who have expanded access to housing, electrification, clean drinking water, education at all levels, as well as confronting the scourge of HIV.”

However, Nzimande highlighted “factionalism, gate keeping, corporate capture, and other forms of corruption, mismanagement, and bad governance” as matters hindering the ANC.

“The crippling of our public entities and the looting must not go unpunished, and those who are involved must be called to account,” he said.

“Let all ANC branches be open to all who want to join the ANC as a people’s movement. In order to succeed we must unite to uproot factionalism, we must deal a decisive blow to corporate capture of the structures of our movement and the state. Our resolution and our organisation is not for sale. A good communist is in the African National Congress,” Nzimande said.