“I’m gonna make the biggest candy floss in the world, because there isn’t one at this stage, there’s no candy floss the size of the one that I’m making, and the chances of achieving it are very good.”
These are the words of family business, Visionary Delights’ co-founder, Coetzer Swart, who will be attempting to add their name to the list of world record holders by creating the ‘Biggest candy floss on a stick’, during this year’s Bloem Show.
There will be two attempts; one on 27 April 2019 and the other on 4 May 2019, as the success of the attempted candy floss is subjected to weather conditions. 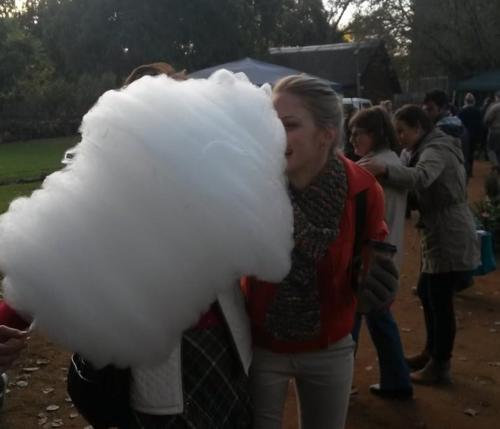 Cotton candy was invented by dentist William Morrison, with the help of confectioner John C. Wharton. Together, in 1897, and for over 120 years, this sweet treat has being bringing joyous memories to families across the globe. Coetzer en Lenie Swart started Visionary Delights six years ago as a way of getting their children interested in the business world. This will we the third time they are going to be part of the Bloem Show.
“The experience of watching how it’s really made and the flavourful taste is unlike the bags you buy in the shops,” Coetzer said.
Residents can also be a part of the world record by bidding for the title of the ‘biggest candy floss on a stick’ on eBay, and proceeds will then be donated to a local charity.
Sharing the experience of watching how the candy floss is made with one’s family and creating new memories, to Swart makes the event so much more meaningful. “We are offering an experience which is bigger than the imagination, hence the reason for the creation of the super-size candy floss. The majority of the time a family buys the supersize and shares it among themselves. The sheer volume of actually seeing one of them next to you and realising that it’s about the size of yourself, is unbelievable,” he concluded.
For more information, visit their Facebook page: Visionary Delights – Home of the Supersize Candy Floss.